I have been a busy bee, but also a quiet one. One that sits, unthinkingly. In chorus, I have been blocked a bit in terms of creativity lately (due I think to moving house, repeated bugs, and then the arrival of a rather large and overly-excitable kitten in my house), and also been trying to craft work deliberately, with some success. Usually the ideas come organically, and I tease them out as I go, reaffirming the themes that appear and the message that follows. I haven’t has as much time to listen to that part of my brain while I’ve had to be pragmatic with everything else, so I rather think that part of me has been asleep and dormant all this time.

At the end of September I started a course with The Poetry School, whereby I’m part of a writing group with other poets and a tutor, and set assignments every two weeks. During that time I write new material and prepare feedback for the other poets. Never having been part of a group like this before for poetry (I have for theatre work), I was excited to receive feedback (usually I just get a yay or a nay from publishers), and so far I’ve found it so, so, encouraging. The feedback is delivered online, which allows an added armour to those writing the words, which I think means they can be more honest in terms of what they think. In some circles it might also make people feel more flippant, but as everyone in the group is so involved and so wants to improve – everyone’s words are measured carefully. Some of the positive feedback I’ve received has been extraordinary to see – and so helpful. I actually look forward to the criticism and hearing the things I haven’t done well, as often the bits you worry about are the best received, and the bits you took for granted are the parts that fall flat. 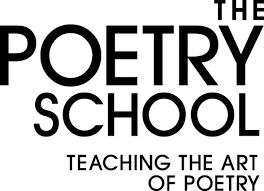 Once the course is over I’ll definitely look for another group to be a part of. It’s also made me wonder if I’d enjoy carrying through some further education in poetry writing, and this is something I’ve never considered before. I’ve never thought of myself as purely a poet as I write many things for many places, but I’ve come to the conclusion that for me poetry is at the hub of all my writing. It’s the pure core of it. The more I learn about poetry, it enriches everything else I write too. It’s a bit like learning the fundamentals of alchemy, which in turn means you can go off and make so many more materials (even if your intention was to only to create gold).

You can read more about The Poetry School here. They’re brilliant!